At more than 1,000 acres, White Butte Trails is one of the last big pieces of unbroken prairie and aspen parkland left near the city. So it was a shock to learn a few weeks ago that the province was considering allowing a private developer to build a golf course on the south side of the site. A few days later, after lots of protest online and letter writing and general upset, the government announced that it wouldn’t permit the development after all. Good news! 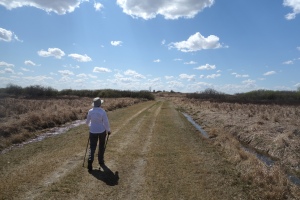 I hadn’t been out to White Butte for a long time, but I’d heard there were crocuses there, and so we headed that way this afternoon for a walk. The cross-country skiing trails were under water and too wet for hiking, so we walked the hiking trail. It’s a road, really, running from the southwest end of the park to the northeast side, but it kept us out of the mud. 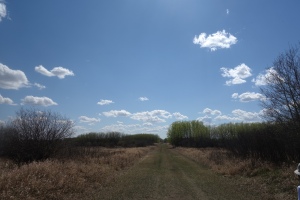 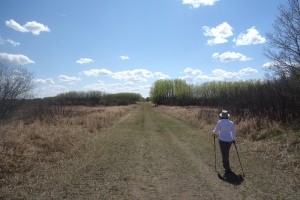 Even though the golf course idea has been shelved, someone has been busy out here with a bulldozer. I don’t understand why but there are quite a few areas beside the road where the vegetation has been scraped away and caterpillar tracks have been left behind.

It’s not surprising that somebody wanted to build a golf course–there’s a development of monster homes pushing up against the southern boundary of the park. Adding a golf course would make that development even more attractive, I suppose. Living next to 1,000 acres of prairie just isn’t good enough.

It’s a lovely place, and a nice walk if not, at 10 kilometres in total, a very long one. I didn’t see any crocuses but I did notice tiny violets–either a northern bog violet or an early blue violet (I can’t tell them apart)–on the path. Too bad my photographs of them are all out of focus. Maybe I’ll see some crocuses when I walk the Saw Whet Trail this weekend.