Fall Walk Around the Lake

When the temperature reaches the high 20s at the end of September, you really have to go outside. So I put away my work and went for a walk around the lake.

The fall colours–yellow ash and elm and poplar trees–were lovely. Soon the trees will be bare. 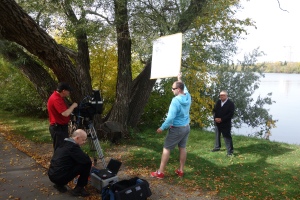 I saw a couple of unusual things: a group riding through the park in a wagon pulled by a pair of Clydesdales, and Ralph Goodale, local Liberal MP and former cabinet minister, getting his photograph taken by the lake.

I’ve walked this route so many times, and I never expect to see anything new. But this time I did: in the lawn by the skateboard park, I found a patch of my favourite native prairie grass, blue grama. I was really surprised, because tame grasses tend to overwhelm and outcompete native ones.

What a great way to spend part of an afternoon. Even better, I met my friend Glenn for a beer afterwards. I do like a cold beer after a long walk!

A Philosophy of Walking

Since it came out last year, I’ve been meaning to read A Philosophy of Walking, published last year by Frédéric Gros, a French professor of philosophy and an expert on the work of Michel Foucault, and I finally got to it last week while we were staying in a cabin in Prince Albert National Park. 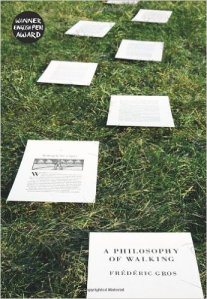 A Philosophy of Walking alternates between chapters about writers who walked as part of their practice (Nietzche, Kant, Rimbaud, Rousseau, Thoreau) and chapters in which Gros meditates about walking. The discussions of writers and walking are fine, but Gros’s own thought-provoking ruminations are what make the book so worthwhile. For example, he notes that most of the time, when we go outside, it’s only in order “to pass from one ‘inside’ to another: from house to office, from your place to the nearest shops. . . . Outside hardly exists: it is like a big separating corridor, a tunnel, an immense airlock.” But when you’re on a walk that extends over several days, Gros continues, “everything is inverted”:

‘Outside’ is no longer a transition, but the element in which stability exists. It’s the other way round: you go from lodging to lodging, shelter to shelter, and the thing that changes is the infinitely variable ‘indoors.’ You never sleep twice in the same bed, different hosts put you up each night. . . . Outdoors is our element: the exact sensation of living there. You leave one lodging for another, but continuity, what lasts and persists, comes from the surrounding landscapes, the chains of hills that are always there. And it is I who wind through them. I stroll there as if at home: by walking, I take the measure of my dwelling. . . . That is how the big separation between outside and inside is turned upside down by walking. We shouldn’t say that we cross mountains and plains, and that we stop at lodgings. It is almost the opposite: for several days I live in a landscape, I slowly take possession of it, I make it my site.

Slowness is key to the experience of walking, Gros argues. “Walking is the best way to go more slowly than any other method that has ever been found,” he writes. Because you move so slowly through the landscape, he continues, nothing in the landscape really changes; instead, the presence of the landscape through which you are walking “is slowly established in the body.”

I recognized my own experience of walking in these meditations; it was as if he was giving shape to my own incoherent thoughts on the subject. How often does that happen? I’ll be returning to A Philosophy of Walking again, because it’ll bear rereading. Thanks to Neil Millar for reminding me that it was languishing in my “to read” pile.

While we were in the park, we went on a few day hikes. Some of the trails we’ve walked before have been closed, and I wonder why. Budget cuts, probably. We encountered a bear on the Spruce River Highlands trail, a big male (I think) who was sitting in a patch of kinnikinnick, or bearberry. I came around a corner on the trail and there he was. “Oh, shit,” I mumbled, and then I backed away, slowly, telling him I wasn’t a threat but that he needed to move. He did, ambling off into the bush. We carried on. He didn’t reappear. I didn’t get a picture, of course; when I saw him, photography was the last thing on my mind. I did take other photos, though. 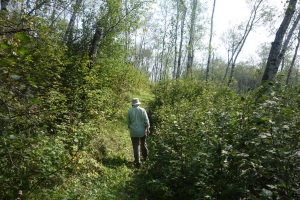 I’ve been thinking some more about my Rideau Trail hike. I’ve been through my gear and I’ve identified the stuff I didn’t need to be carrying. Getting rid of that stuff would’ve lightened my pack, at least a little. I went back to an older pair of boots that seem to fit better and that might be the answer to my blister problem. I needed to carry a cellphone on a network with better coverage in eastern Ontario (if such a thing exists). I wasn’t carrying enough food, and I wasn’t carrying the right kind of food. I wasn’t stopping to eat, either; I wasn’t hungry, but I needed to eat anyway. And I simply wasn’t fit enough. Before I walked the Camino, I walked a lot carrying a full pack as a way to prepare, and I just didn’t have time to do that this summer. There are a lot of lessons to learn from the experience. Maybe–just maybe–I’ll try the Rideau Trail again some time.

A few photos from my Rideau Trail adventure: 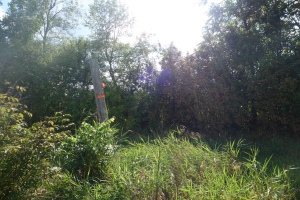 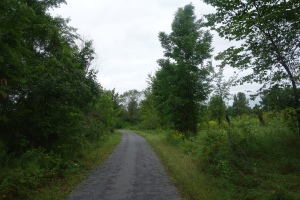