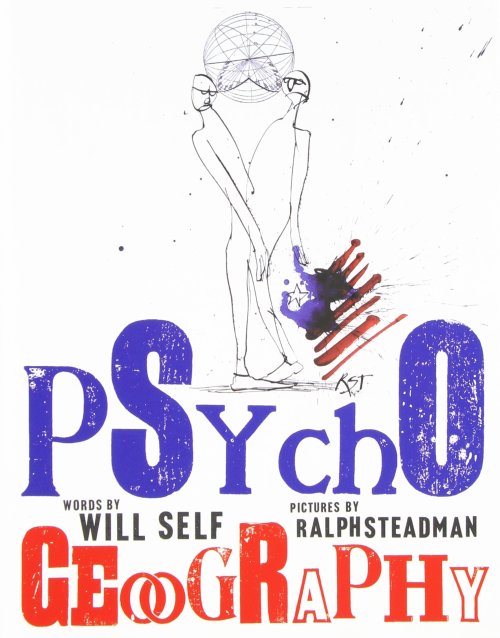 I’m reading Will Self’s book Psychogeography and came across this defence of walking:

I’ve taken to long-distance walking as a means of dissolving the mechanized matrix which compresses the space-time continuum, and decouples human from physical geography. So this isn’t walking for leisure–that would be merely frivolous, or for exercise–which would be tedious.

Indeed. My toe seems better, and I’m looking forward to dissolving the matrix which compresses space-time later this week.

I met with Rob Knox from the Department of Geography last week. He explained what .kml and .kmz files are for and how to integrate GPS information with Google Earth. He showed me GPS tracking units and examples of the way he’s tracked walks and bike rides using them. It was very productive, and right afterwards I found an app for my phone that allows me to export GPS data to Google Earth in a .kmz file. So this is what this morning’s walk to work looked like on Google Earth: 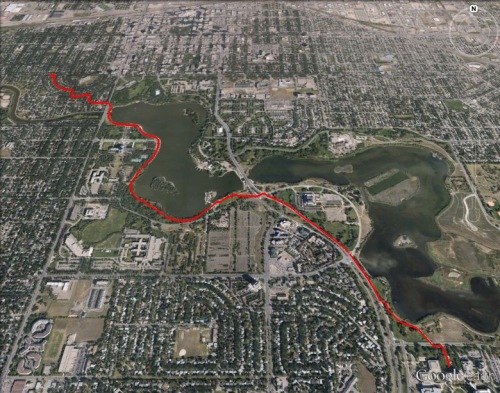 I’m going to keep testing this app to see how much battery life it uses, but I might take Rob up on his offer to borrow a GPS unit for my walk in Ontario in June. I’ll have to test that thoroughly, too, if that’s the direction I decide to take. However, I like the images this app produces through Google Earth much better than the ones made by the app I’ve been using to map my walks (called, not coincidentally, “Map My Walk”), even if it’s a little more complicated to create them. When I look ahead to my walk in June, I think it will make a lot more sense to include a picture rather than a map. I’ll be walking through territory that originally belonged to the Six Nations, and I can’t help thinking there’s something a little dodgy, politically speaking, about being a settler and mapping that space. An image, though, feels different.

In other news, it looks like I broke my pinky toe, again, on my first walk on the Old 16 Road loop. I remember feeling a sudden shooting pain in my foot, and that must be when it happened. That toe has broken many times before in the last 25 years; it’s something I just have to live with. Sometimes, if my boots are too tight, it will break when my foot swells during a walk. I’m not too worried–the same toe broke about six weeks before I walked the Camino de Santiago and it healed before I left, despite all the training walks I took–and although it’s too swollen to fit most of my shoes, it still fits into my hiking boots. Really, that’s all I need. That, and ibuprofen, and I should be fine.

Yesterday, I decided to try the Old 16 Road loop again. This time, though, I walked in the other direction–clockwise instead of counter-clockwise–and I took the footpath through the southeastern suburbs. Otherwise the route didn’t change. Imagine my surprise when it turned out to be some three kilometres shorter than what I walked on Friday. The footpath must be a shortcut. 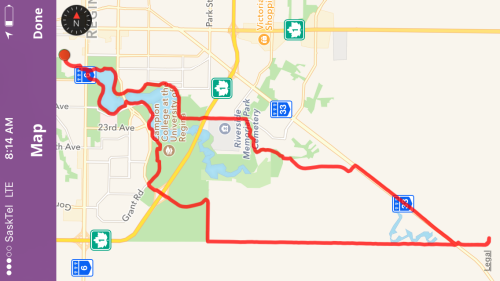 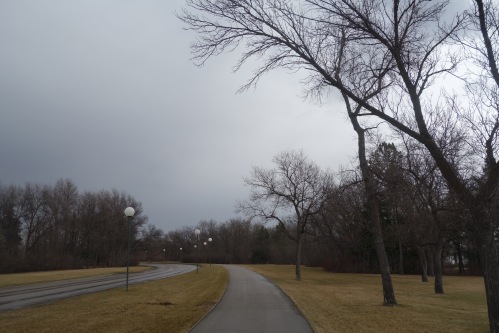 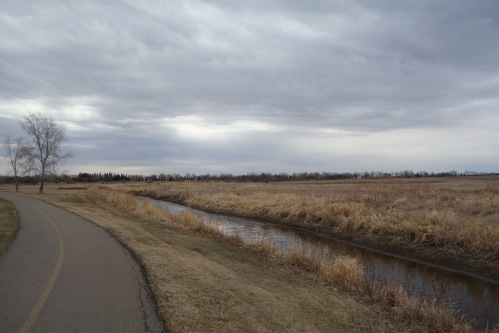 A light rain was falling when I left the house, but it stopped after an hour or so. It was quite warm for mid-April and I was able to walk without my coat. I was carrying dog biscuits again but Mr. Angry Dog didn’t make an appearance. Maybe he was spending the day inside. Three other dogs came out to take a look at me, but they were safely behind a fence. So I didn’t get to test my treat theory again. Too bad: I really need more data. 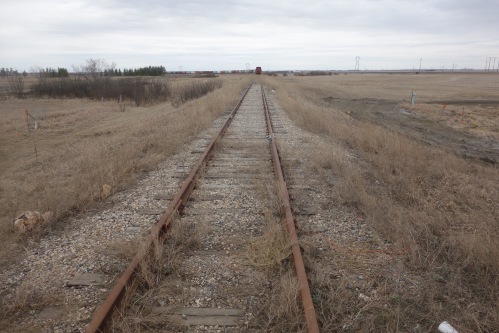 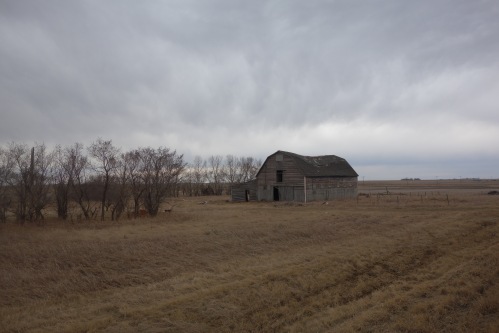 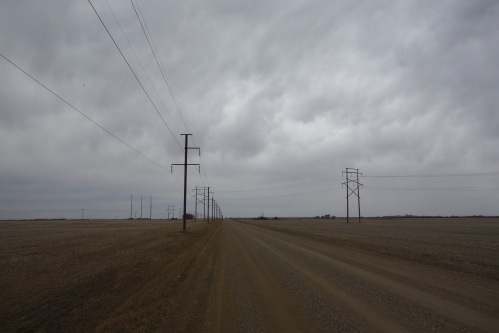 When I got to the Cowessess Gas and Grocery, I stopped listening to Mark Maron’s interview with David Byrne and started listening to meadowlarks and the sound of the wind in the power lines–an unearthly, resonant growl.Walking in the other direction, I noticed new things: railway tracks, a slowly collapsing barn, a “road impassable when wet” sign, a home quarter that’s been cleared for the plough with a bulldozer. 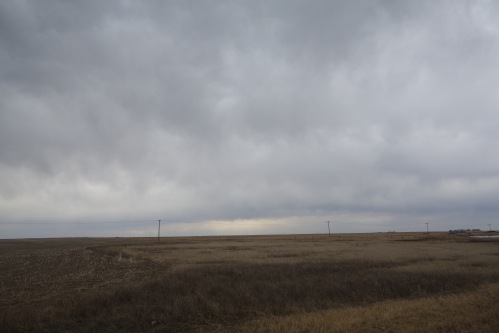 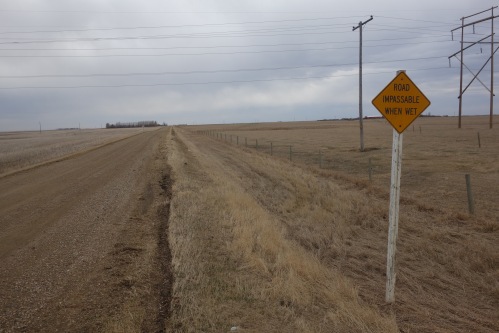 I walked through the university and stopped by the Visual Arts department’s open house for a glass of iced tea. Then I headed home for a Guinness and a rest. I’m still surprised that the footpath cut the distance so significantly; if I walk this route again, maybe I’ll stay on the street, to make it a little longer. In any case, it’s good to know I’m getting closer to being prepared for my long walk in June.

33 Kilometres on the Old 16 Road Loop

A few weeks ago, I suggested that my goal was to be able to walk, comfortably, 32 kilometres (or 20 miles). Yesterday I walked a little farther than that. But comfortably? I’ve got a lot of walking to do before I’ll be able to say I’m comfortable walking that distance. 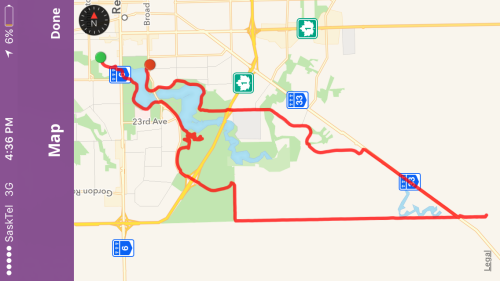 My plan was to walk through the university (I had a meeting there) and down to Old 16 Road, which I’d follow as far as the Cowessess Gas and Grocery (along the route Trevor Herriot took on the walk he wrote about in his wonderful book, The Road is How). When I got to the gas station, I’d eat lunch. Then I’d start walking back northwest towards home. And that’s what I did. 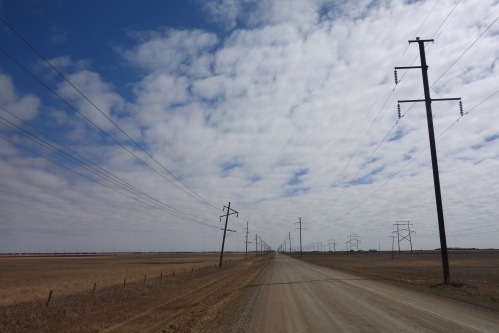 I walked this route two years ago, and I haven’t done it again, partly because I was apprehensive about the angry farm dog who lives near the bridge where Old 16 Road crosses Wascana Creek. And, sure enough, he was there, enraged that someone was trying to walk through what he considers to be his territory. But this time I was ready. I had a couple of dog biscuits in my pocket. My theory was that angry dogs could be calmed with treats. So when Mr. Farm Dog started growling and barking, I tossed him a Milk Bone. It worked! He ate it and wandered away. I didn’t take his picture, though, because I was too relieved, and surprised, that I got past him so easily. But I did take a picture of Wascana Creek, just on the other side of the bridge, where one lane has been closed for repairs. 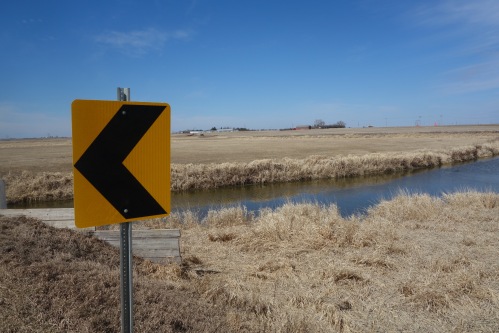 Sadly, the Cowessess Gas and Grocery no longer sells bannock. “Yeah, the guy who used to make it moved away,” the fellow behind the counter told me. So I ate a Clif bar instead, along with one of the apples I’d put in my knapsack. Then I turned and headed back. 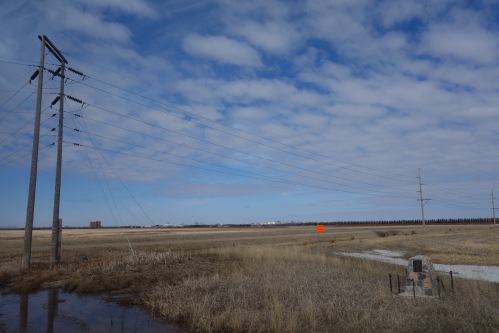 As soon as I could, I left the highway and walked through the city’s southeastern suburbs. When I did the same walk two years ago, I went along a footpath that runs through a long park. This time, though, I couldn’t find the footpath, so I walked along the sidewalk until I passed the Mormon temple behind its high steel fence. The golden figure on top of the temple is the Angel Moroni, who supposedly showed Joseph Smith where the golden plates on which the Book of Mormon was written. Apparently every one of their temples has the same sculpture on top of it. 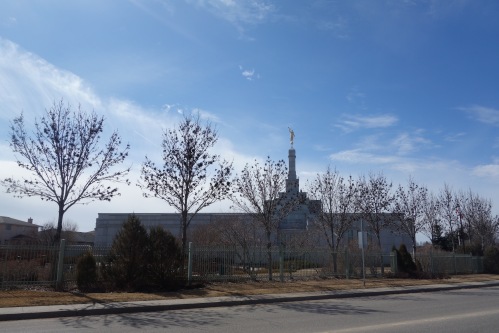 I trudged over the bridge across the Ring Road and plodded through Wascana Park. Eventually, tired and sore, I got to a pub, where I had a drink and met Christine for a lift home. So I didn’t quite complete the entire circuit: I only walked 33 kilometres instead of the full 35 or 36 to complete the loop. And I can’t say I was comfortable. No, it’d be more accurate to say I was exhausted. Truth be told, I still am. I know it’s possible to walk that kind of distance day after day–when I was in Spain, walking the Camino de Santiago, that’s what I did–but I’m not ready to do it yet. I will be, though, before I leave for my next walk.That’s my new goal. I’ve got two months to reach it.

This morning I suggested that we walk to the site of the former Regina Indian Industrial School. I had a vague idea where it was and an optimistic sense of how far we’d have to walk. I was right about the location, but it was a lot farther than I’d imagined. But pilgrimages should be difficult, and this walk counts as a pilgrimage, I think. 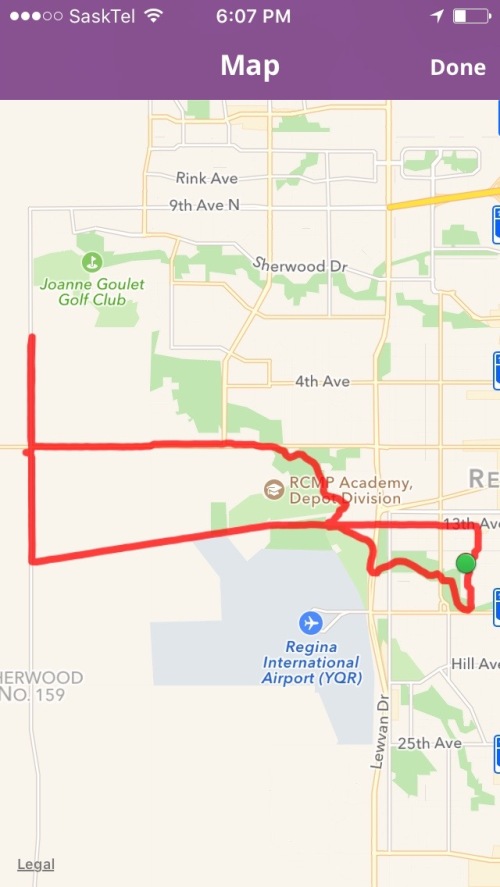 The site of the school isn’t hard to find. When you get to the corner of Dewdney Avenue and Pinkie Road, you turn north. There’s a big liquid propane gas facility on the west side of the road, and just before you get to some sheds belonging to a construction company, you’ll see a white rail fence with weather-worn teddy bears and toys fastened to it. That’s where the school was–or at least where its graveyard was, and is. Using ground-penetrating radar, archaeologists have found at least 40 unmarked graves within and outside that fence. Those children died when they were students at the school, and nobody even had the decency to return their bodies to their families. Like everything else about residential schools, it’s a tremendous wrong. It’s shameful. At least it looks like the city will purchase the site to prevent it from being developed. Good thing, because we walked by the site of a huge housing and retail development called Westerra, which is a sign of what’s likely to happen to this part of the city in the future. Without care and attention, the site of the Regina Indian Industrial School, and its graveyard, could easily be obliterated by a similar development. 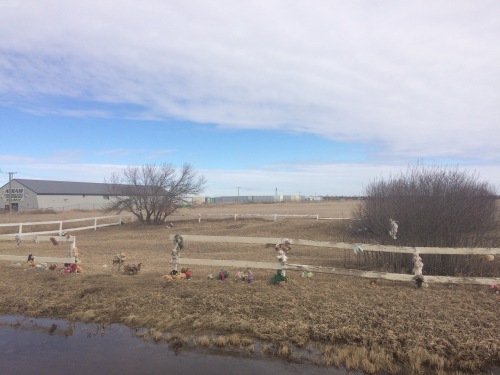 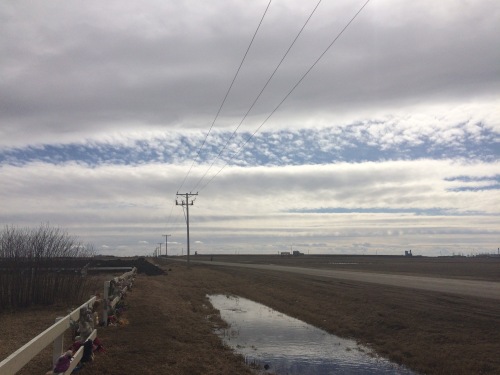 I left some tobacco by the fence and thought about those children. Then we started back. We stopped at the Sakimay First Nation’s gas bar and convenience store at the corner of Dewdney and Pinkie. I’d hoped they sold bags of bannock, like the Cowessess First Nation does at their gas station on the other side of town, but no luck. Oh well. We bought a little bag of chocolates instead. Then we made the long trudge along 13th Avenue back home. Altogether we walked 21.5 kilometres today–a reasonable afternoon’s work. 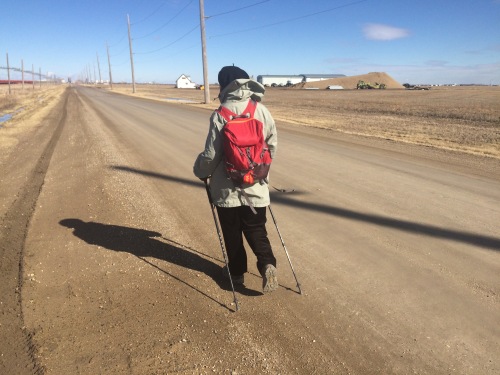 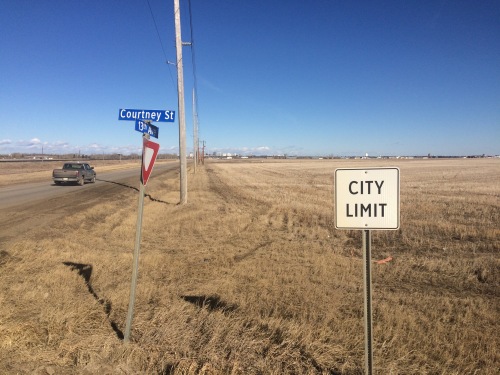