In the past couple of weeks, I’ve read two books about walking while a sore knee has been keeping me close to home. The first, Morris Marples’s 1959 classic Shanks’s Pony, is primarily focused on English writers who were also walkers. The second, W.G. Sebald’s The Rings of Saturn, is a fictional (or perhaps fictionalized–it’s always hard to tell with Sebald) version of a walking journey in Suffolk. 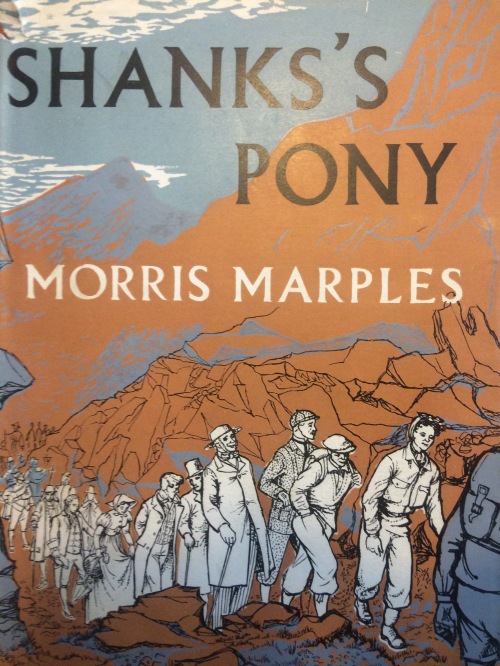 Two chapters in Marples’s book examine non-literary walkers. One discusses the professional “peds” of the eighteenth century, who would engage in long, fast walks (such as the challenge to walk 1,000 miles in 1,000 hours) to win lucrative bets. The last chapter is a brief look at the rambling clubs in the twentieth century and their effect on both walking and the countryside. Marples’s class anxiety comes through loud and clear in that chapter: he complains about “hooliganism, damage, destruction, and litter” that have resulted from an interest in walking by people outside of the literary elite he writes about elsewhere in the book, and concludes that “the invasion of the country by townspeople is bound to continue, and we have got to make the best of it.”

But the rest of Shanks’s Pony surveys the history of English writers who were also walkers, or whose walking played an important role in their writing. Many familiar names in the literature of walking are here–Wordsworth, Coleridge, Robert Louis Stevenson–but many others are new to me. I didn’t realize, for instance, that Leslie Stephens was an inveterate walker. Nor had I heard of the Renaissance writer Thomas Coryate, who travelled to Venice and back–walking on the return journey, because he was out of money–and wrote about the experience in a book called Coryate’s Crudities, or Coryate’s contemporary, Wlliam Lithgow, who walked some 36,000 miles over 19 years of “pedestriall pilgrimages.” I didn’t know that the Romantic poet and critic William Hazlitt was a walker (and the author of an apparently famous essay on the topic). Thomas De Quincey was a walker, too, and according to Marples, “strenuous daily exercise was the only way of counteracting the torpor caused by” his daily use of opium. Keats was a walker, too, as was Shelley. I didn’t realize that walking was so important to so many of the English Romantics.And not just the Romantics, either.George Borrow went on many long walks, often travelling with Roma and Sinti people, about whom he wrote. Hillaire Belloc walked to Rome and wrote about his journey. And Marples doesn’t just write about walkers; he also devotes a chapter to mountain climbing as well.

Marples devotes several chapters on women who walked. He begins, of course, with Dorothy Wordsworth, who kept pace with her brother (as well as Coleridge) on their walking tours. But I’d never heard of Ellen Weeton, who recounted her walking tours in several books around the turn of the nineteenth century. One problem for women like Wordsworth and Weeton was the fact that the fashions of the time did not allow for energetic walks–a problem that wasn’t solved, Marples says, “until women took to wearing trousers,” something that didn’t happen until well into the last century.

The phrase “energetic walking” hardly describes the kind of walks made by these men and women. Marples tells of people walking 30 or 40 miles in a day. That’s 50 or 60 kilometres–an unimaginable distance for someone like me, who struggles to finish a walk of 40 kilometres, while wearing the latest in lightweight hiking gear. President Theodore Roosevelt wanted his senior military officers to be able to walk 50 miles in 20 hours, a distance and rate of speed that seems incredible to me, but in the context of the 19th century, where people regularly walked like that, it becomes a more plausible feat.

Marples’s book is long out of print, of course–my copy used to belong to a library in central Wales–but it can be found online quite easily. And it’s worth a look if you’re interested in the intersections between walking and writing, at least in England. 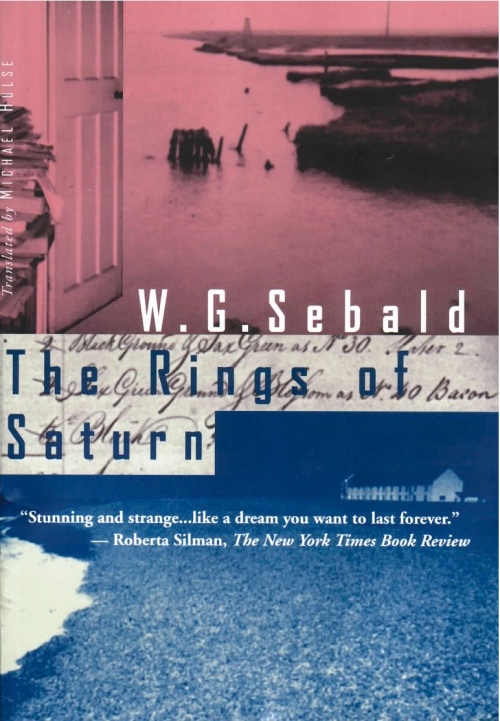 W.G. Sebald’s The Rings of Saturn is, in part, an account of a walk through Suffolk. But Sebald’s digressive narrative means that the book is about much more than that. The book follows its narrator’s mind, which floats freely across literature and history, touching on topics like the life and writing of the Renaissance writer Sir Thomas Browne, the books of Jorge Luis Borges, the life of Joseph Conrad, and the introduction of silkworms to Europe. It’s not clear whether these are things the narrator thought about while he was walking, or whether they are things he considers as he writes about his experience. That’s one of the mysteries of this wonderful book.

One of Sebald’s trademarks–and this goes for all of his writing–is his use of long, sinuous sentences. They seem to go on forever, and they help to create the dreamlike atmosphere that’s so characteristic of his work. Another trademark is his use of photographs. Black-and-white photographs, always uncaptioned, grace the pages of his work, and it’s up to the reader to determine their relationship to the text. Sometimes the connection is obvious. A reproduction of Rembrandt’s The Anatomy Lesson, for instance, is related to Selbald’s narrator’s belief that Browne was among the onlookers in the anatomy theatre in Amsterdam which is the subject of Rembrandt’s painting. According to this essay by Rick Poynor, Sebald was an avid photographer and the photographs he includes in his books are the product of his own camera. Sometimes he would photocopy them to make them seem as if they were taken from other print sources.

According to Poynor, Sebald’s syntax and his use of photographs are linked. “Sebald,” he writes,

is brilliantly visual. He makes you realize with some discomfort that you often fail to look attentively enough at what you see. Another novelist referred to the “phenomenal configuration” of the author’s mind and what astonishes and delights in Sebald’s sentences, superbly rendered by his translators, is his ability to convey not just the detail of so many things hitting the senses in a rain of fleeting simultaneous impressions, but the precise emotional shading and personal import of each of these moments. His eye records with photographic accuracy and then these perceptions are recovered from memory and reconstituted as fictional experience with the same exhilaratingly scrupulous fidelity.

which he apparently intended, lies in our uncertainty about how much of what he describes derives from his own experiences (seemingly a lot) and how much of it is largely or entirely imagined. Based on a reading of the books alone, the narrators show every sign of being Sebald himself, but we know from what he has said elsewhere that these melancholy figures are fictionalized versions of the author.

As I read The Rings of Saturn, I found myself wondering what the relationship between Sebald and his narrator might have been, and whether the author did, in fact, go on a long walk through Suffolk himself. Are the people the narrator meets versions of people that Sebald himself met? How much is real, and how much is imagined? I don’t know.

At its heart, though, The Rings of Saturn is a book about death, about entropy and decay. Almost everyone the narrator thinks about is dead, and he tells us when and how they died. He stays with a family who personifies entropy: their fortunes are in decline and they are incapable of turning around their downward trajectory. He spends time in declining towns like Lowestoft, which is now a shadow of its former Victorian prosperity. He considers the Jasenovac concentration camp in Croatia, where 700,000 men, women and children were murdered and where the former Secretary General of the United Nations, Kurt Waldheim, worked as an administrator. He passes close to the site of medieval Europe’s most important seaports, Dunwich, which was claimed by coastal erosion, slowly falling into the sea over a period of centuries. The rings of Saturn themselves are, according to the novel’s epigraph, “fragments of a former moon that was too close to the planet and was destroyed by its tidal effect,” and the planet becomes a harbinger of death in one passage derived from Thomas Browne:

As I sat there that evening in Southwold overlooking the German Ocean, I sensed quite clearly the earth’s slow turning into the dark. The huntsmen are up in America, writes Thomas Browne in The Garden of Cyrus, and they are already past their first sleep in Persia. The shadow of night is drawn like a black veil across the earth, and since almost all creatures, from one meridian to the next, lie down after the sun has set, so, he continues, one might, in following the setting sun, see on our globe nothing but prone bodies, row upon row, as if levelled by the scythe of Saturn–an endless graveyard for a humanity struck by falling sickness.

Wow. What an image. Seen from a great distance, people going to bed with the setting sun become a pantomime of mass death. Sebald’s melancholy vision of the world might be hard for some people to accept, but it accords with my own, although I could never express it in such powerful words (whether they are Browne’s or Sebald’s or a mixture).

Sebald taught German literature at the University of East Anglia in Norwich. He wrote in German and his works were translated into English by, among others, Michael Hamburger, who translated this edition of The Rings of Saturn and whom Sebald’s narrator encounters during his walk. Sebald died in a car crash in 2001–a tremendous loss for world literature.

So, two very different books about walking: both worth reading, but for very different reasons. Sebald’s novel is by far the greater achievement, although like other books on the topic of walking, Marples’s history is an interesting discussion of the history of pedestrianism. I’m glad I read both.