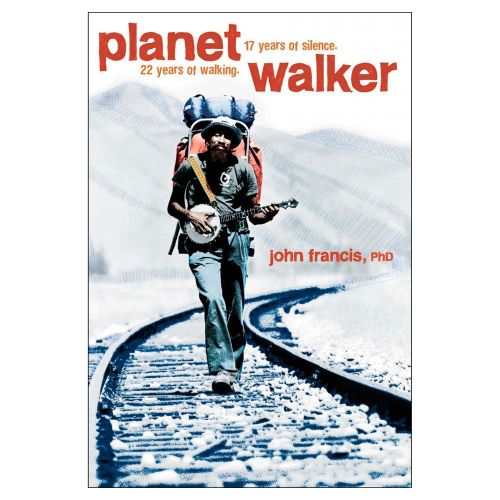 In 1971, two oil tankers collided in the fog beneath the Golden Gate Bridge. John Francis, a hippie living north of San Francisco in Marin County, caught a glimpse of the aftermath: oil coating the shore and volunteers trying to save dying birds. Those sights affected Francis deeply. He decided that by driving or even riding in petroleum-powered vehicles, he was contributing to a system that was destroying the planet. So he started walking everywhere. And for the next 22 years, he avoided trains and planes and automobiles. Instead, he walked, or occasionally cycled.

Most people thought that decision was strange, and that Francis himself, although harmless, was more than a little eccentric. But others got angry. Did Francis think he was better than everybody else? they asked. Who made him some kind of environmental saint? After walking, and arguing, for a few years, Francis made another big decision: he stopped talking. Not talking allowed him to learn to listen, he writes. That vow of silence lasted for 17 years.

Francis walked for some 10 years, including annual 500-mile hikes to visit friends in Oregon. Then he felt it was time to do more. With some friends, he established Planetwalker, an environmental education non-profit. And he started walking even farther: right across the United States, with stops along the way, in Montana and Wisconsin, to complete graduate degrees in environmental studies, including working as a teaching assistant. And he completed all that walking and studying without speaking a word. Instead, he communicated in sign language and with his ever-present banjo.

In Planetwalker, Francis tells his story. It’s a fine book, well-written and thoughtful and humble, with illustrations from the author’s sketchbooks. I’d heard about Francis–every book about walking makes reference to his story–and I’m glad I stumbled across Planetwalker in a tiny bookstore on the other side of town called Turning the Tide. No, I didn’t walk there–I was running errands, and so I was driving–but since I finished Planetwalker I’ve been wondering every time I get in the car to go somewhere: is this trip really necessary? Not that I could make the kind of commitments Francis did. I mean, I like walking, but going everywhere on foot? All the time? I don’t think I could do that.

One aspect of Planetwalker that interested me was the way Francis camped on his walks. In England, they’d say he was “wild camping”; in North America, it’s described as “stealth camping.” Francis would pitch his small tent wherever he stopped for the night, often on private land without permission. (Who can say who the owner of a particular plot of land might be?) Francis made his walk in the 1980s, and maybe things were different then, but he was rarely bothered by anyone, including law enforcement. I wonder if it would be possible to make similar walks now, camping behind trees or abandoned buildings or along roadsides, without getting arrested.

If you’re interested in pedestrianism, Planetwalker is definitely worth reading. And if you’re interested in the connection between the personal and the political, between global issues and local action, it’s worth reading, too. “The only person one has the ethical authority to change is oneself,” Francis writes. “When we change our self, we indeed change the world. As we continue our journey we can make a difference in our community and in the world, one step at a time.” If that’s true, it’s quite a hopeful statement. Planetwalker has given me a lot to think about, and I’m grateful to John Francis for writing it.