Another Walk to the Eastern Edge of the City 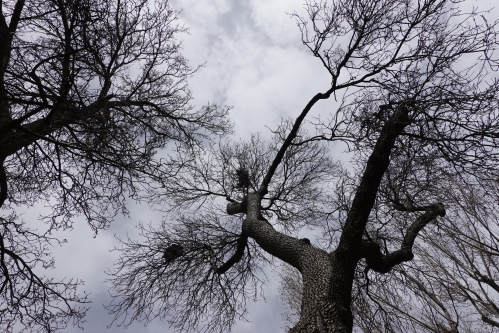 I leave the house and walk north, towards Victoria Avenue. House sparrows are chirping in the cold air. At Victoria, I turn east. I’m going to walk in that direction, more or less in a straight line, for the next three hours. At the corner of Victoria Avenue and Albert Street, I pause in front of the city’s most famous vacant lot, the site of a failed condominium project which left a massive hole that the city had to pay to have filled in. It’s now fenced off, a gravel wasteland with big signs announcing it’s for sale. If at first you don’t succeed, try again.

A heavy smell of pancakes and frying bacon fills the air, even though all of the nearby restaurants seem to be closed because of the pandemic. Where is it coming from? The seats and backs of all the benches in front of city hall ave been removed. A sign nearby says, “We Are All In This Together.” A long sheet of plastic hangs in a tree in front of the SaskPower headquarters, as if a guerrilla Christo has been at work. Across from this installation, a coffee shop is closed despite the handwritten “open” sign in the window. 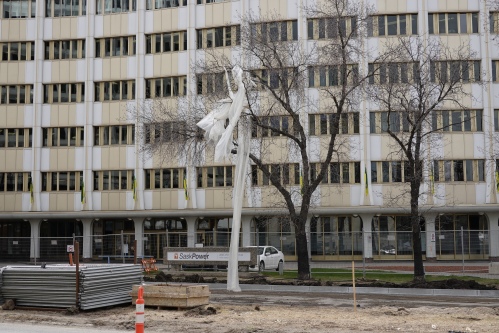 At the corner of Broad Street, a hotel announces that it is sending love to essential workers. What I remember as a print shop is now a detox centre. From a distance, I can see a thin layer of green on the branches of the street elms; close up, though, the branches look black. Maybe it’s a trick of the light. Pigeons are roosting on a roof. A lone sparrow is calling. 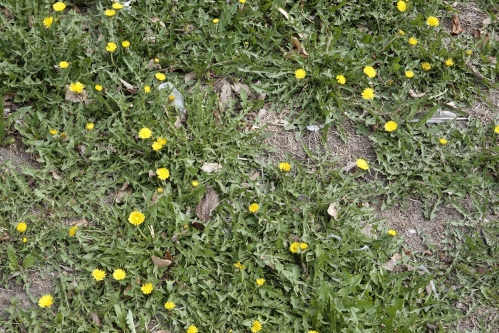 An old frame duplex is being renovated. I mistake a plastic owl in a window for a cat. I notice an old house covered in red insulbrick; it reminds me of the house next door to my grandmother’s place when I was a kid. Insulbrick, I’ve been told, lasts forever because it’s made of asbestos. The next block is lined with houses that look abandoned.  A barking dog beside one of them startles me; clearly the houses aren’t empty, even if they look that way. On the corner of Winnipeg Street, a man is digging a hole in the sidewalk in front of a building that used to be a bank. The Milky Way is open, but it’s too cold for ice cream.

A temporary fence surrounds a vacant lot. Dandelions are in bloom. The stores and restaurants here are owned by newcomers to the city: an African grocery, and Japanese, Korean, Vietnamese, and Indian restaurants. The massage parlours have been closed because of the pandemic. I hear a man’s voice in the distance, broadcast through loudspeakers or a megaphone. Where is it coming from? I wonder. Could it be the auto auction I’ve walked past over on Arcola Avenue? A nightclub resembling a concrete bunker stands across the street. In front of a rundown house, two young dogs are on guard duty, barking behind a makeshift fence. Around the corner another dog barks at me. I ask myself if the dogs and fences are a symptom of the city’s problem with property crime.

I cross Arcola Avenue. The sound of the auctioneer is clear now. I can hear every word he says—“and now lot 70, a 2017 Dodge Ram pickup truck”—but no bidders are visible. Maybe they’re inside the building, I think, but if that’s the case, why broadcast the auctioneer’s voice throughout the neighbourhood? East of Arcola, Victoria Avenue is a broad avenue with narrow sidewalks and few trees. This is the neighbourhood that the ceramicist Vic Cicansky writes about in his memoir. Now, though, the side streets appear to be mostly industrial; I can’t see any sign of the community where Cicansky grew up. I arrive at Park Street. The building that houses the local newspaper has been leased to other businesses. There are few reporters working there now, and the presses are gone; the paper is now printed in Saskatoon. A billboard announces that it knows our names. I cross onto the service road and walk past a McDonald’s. A man stands outside, waiting for his food. I can smell frying fat. Behind me, a threatening ridge of cloud is moving in from the west. It looks like it might snow. The frying smell is making me hungry, and I eat a granola bar. A gopher whistles. The service road loops underneath the Ring Road. Victoria Avenue is now a busy highway. I wouldn’t care to be walking there; I’m glad for the service road.

East of the Ring Road, a trailer park stands next to a hotel. Birds sing in the mature trees of the trailer park. There are six lanes of highway here, in addition to the service road, but apparently it’s not enough; one of the rationales the government gave for the Bypass project was traffic congestion. Across the highway stand big box stores and a mall; on the north side, where I’m walking, there are fast food outlets and small plazas. Denny’s is offering a 20 percent discount on takeout and delivery. I’m surprised to meet three other pedestrians. Behind me, I can see the city centre on the horizon.

There is no crosswalk at Fleet Street, and the sidewalk ends immediately to the east. Pedestrians are not welcome here. I continue my way through parking lots and along the edge of the road. The edge of the city is getting nearer. The temporary bridge over Pilot Butte Creek is closed to vehicles and pedestrians, and I follow the detour beside the highway. Sparrows are sitting on the bridge’s deck, and pigeons are roosting on the supports underneath. A pedestrian heading west ignores the signs and crosses the bridge anyway. I could have done the same. Next time I will, too.

The service road veers north, and I follow, rather than taking my chances on the side of the highway. On the other side of the path, someone is walking a dog along a bicycle path. Houses stand in the distance. I smell diesel exhaust and wonder why I haven’t seen much litter on this walk. A meadowlark sings on top of a spruce tree across the street. I cross Prince of Wales Drive. I’m at the edge of the city, or at least what used to be the edge of the city; it has sprawled further east in the past few years. The service road turns south. It’s lined with empty-looking hotels. I walk past a mosque and a farm equipment dealer. A cigarette package expresses an unmistakeable sentiment.

The Bypass, or at least part of it, is now visible on the horizon. I pass an RV dealer and a school for truck drivers. Another sign announces a redevelopment opportunity. Across the highway there is a large retail development and a new multiplex. I hear scraps of a meadowlark’s song through the traffic noise. The wind is picking up. I walk past a television station and the tall antenna mast that gives the road I’ve just crossed its name. I cross the Canadian National siding that leads to the Intermobil terminal. Everything seems abandoned, despite the traffic speeding past on the highway. Maybe that’s because it’s Saturday. The wet ditch is filled with garbage. No frogs are singing. Perhaps it’s too cold. A robin flies across the road, its mouth filled with a bundle of grass for its nest. Across the highway, near Costco, a meadowlark is singing. A cyclist passes me. His clothes and his backpack suggest he’s on his way to work somewhere. A grackle—I think it’s a grackle—makes a sound like a rusty gate opening. I hear a train in the distance, sounding its horn at a level crossing. 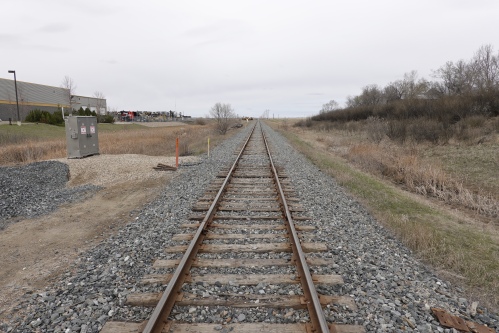 Ahead is the interchange where the Bypass meets Highway #1. A red-winged blackbird stands on the shoulder of the road in front of an equipment dealer. A large muskrat is swimming in the flooded ditch. Two shovel headed ducks—a male and a female—fly up from the slough. I try to take a photograph of the interchange. It’s not easy: it’s too big, for one thing. The light is now behind the overpass. Maybe if I started from Emerald Park or White City early in the morning and walked west I could get a better picture. I call home and ask Christine to come and get me. If it weren’t so cold, and if my feet were tougher, I could turn around and walk back, but I feel I’ve accomplished what I set out to do on this walk. 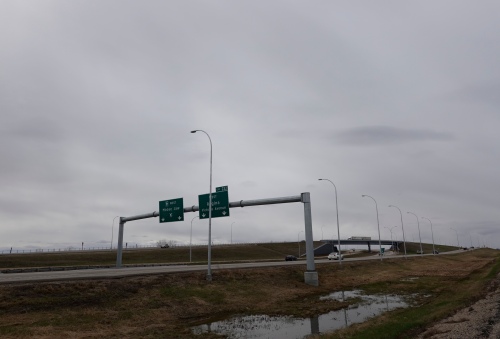 A yellow-headed blackbird chases the red-winged blackbirds out of the slough. A cyclist is heading west; we wave at each other. An orange cat is hunting on a farmhouse lawn. The farm’s dog smells me and barks an alarm. The Pilot Butte interchange is in the distance. I can see the new gas station there. A flock of grackles feeds in the ditch. Another meadowlark is singing.

This site uses Akismet to reduce spam. Learn how your comment data is processed.